The foundation of ILM Trust in 1990 is attributable to the vision of Dr Hasan Sohaib Murad. With limited resources but an extraordinary team, he laid the foundation of an entity that he wanted to have a lasting and far reaching impact on the educational landscape of the region. Although the Trust was set up on June 16, 1990, the groundwork for launching programs to enhance the employability of the youth and make them globally competitive, was already being laid down due to the foresight and vision of Dr Hasan Sohaib Murad and Abid H K Shirwani. Few people would have anticipated the impact of their endeavors on the educational landscape of the country at that time.

Initially, the two-member team comprising of Dr Hasan Sohaib Murad and Abid H K Shirwani, came up with the idea of offering short courses or workshops. These were later upgraded into diploma programs for which affiliation was obtained from the Board of Technical Education. These programs were launched on December 22, 1990 and the guest of honor on the occasion was then Punjab Governor Mian Muhammad Azhar. In December of the same year, the first Training of Trainers (ToT) was held for professional trainers which was conducted by Abid H K Shirwani. In January 1991, the class of ‘Computer Applications for Managers,’ was initiated.

The first advertisement for the diploma programs appeared in the first quarter of 1991. The success of these programs can be gauged from the fact that the Prime Minister of Pakistan, awarded diplomas to the distinguished award holders on January 22, 1992.

In 1992, the Executive MBA was launched which not only was a pioneering and highly successful program, but also established the credentials of the educational ventures under the banner of ILM Trust. In 1995, the BS Computer Science program was launched and from then onwards, it is a story of continuous struggle and remarkable achievement.

A Saga of Remarkable Progress

Over the course of more than 31 years, ILM Trust has successfully launched multiple projects. The Institute of Leadership and Management, which began in small rented premises, is now University of Management and Technology with 25,000+ alumni, 21,000+ students and campuses in Lahore and Sialkot. The Institute of Knowledge and Leadership which is the corporate consultancy and training powerhouse, the UMT Press which is the publishing arm of the University, along with the TKS Schools and ILM Colleges, bear testimony to the contributions of ILM Trust rendering invaluable services for the social and economic development of Pakistan.

Almost all humans can easily claim to be good, but only a few dream of becoming great, and very few actually achieve true greatness. 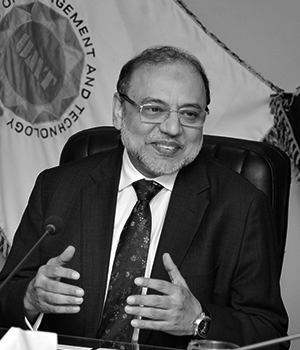 Almost all humans can easily claim to be good, but only a few dream of becoming great, and very few actually achieve true greatness.